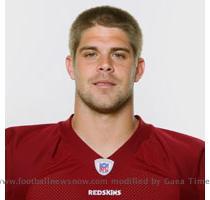 BIG ISLAND, HAWAII (GaeaTimes.com)- Former University of Hawaii quarterback Colt Brennan’s car accident in Queen Kaahumanu Highway near Makalawena Beach on the Big Island, came up as a shock to his fans. However, his father Terry Brennan, has lately reported that though his injuries are severe, it is not life threatening. The former Washington Redskins quarterback will recover very soon and will resume a normal life after the final check up at the Queen’s Hospital in Oahu.

Colt Brennan was initially admitted to the Kona Community Hospital after the accident, when he was riding with another woman, who is reportedly his girlfriend. The doctors at the hospital reported that he is suffering from a face lacerations and possible head injuries apart from three to four broken ribs, a left clavicle, and some head type trauma. They told Terry Brennan, that they have done everything that they could to bring him out of danger but he needs further treatment. He was soon airlifted to Queen’s Hospital in Oahu for a further diagnosis and treatment. Reports say that the player was riding a Toyota SUV driven by his girlfriend. Colt Brennan’s girlfriend got out of the car soon after the accident, leaving Colt Brennan stuck inside until he was rescued by fire crews. However, she has also been admitted in North Kona Community Hospital. Their car collided with a Saab sedan, which was being driven by a woman, with her husband at her side.

Colt Brennan ’s father has reported that the player is under anesthetics, and few more tests are yet to be done. He would further undergo some more head monitoring at the Queen’s Hospital. Major Randy Apele of the Hawaii Police Department has said that it has not been determined what led to the accident. It could be due to the impact of alcohol, drugs or rash driving.

INDIANAPOLIS (GaeaTimes.com)- Indianapolis Colts punter Pat McAfee has been suspended by his tea...

ABU DHABI - A housewife in a race course, a man stuck in the wilderness of a forest and an emotional...

No power teams in NFL 2010Pretty soon the 1972 Miami Dolphins can relax, a whole lot earlier than la...

After facing Manning for fun, Chiefs safety gets to face him for real

Chiefs using every angle to get ready for ManningKANSAS CITY, Mo. ? As a loyal Tennessee grad, Peyto...