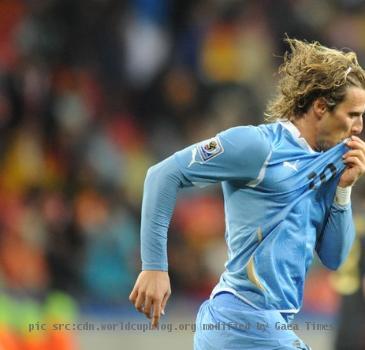 Although, his country had to taste a bitter loss in the semi finals against Netherlands, the golden ball winner was always impressive on the ground. Diego Forlan scored five goals in total in the entire tournament.The golden ball winner happens to be a striker of Atletico Madrid who netted his first goal in the tournament against the host country South Africa. Following that he scored his next goals against Ghana and against Netherlands.The final goal of the tournament from Diego Forlan came in the third position play off match against Germany. Before he came to play for the world cup, the golden ball winner led his team Atletico Madrid to clinch the Europa League. In spite of the fact that Uruguay didn’t make it to the top in the world cup, Diego Forlan told the media that he is happy with the way his team has performed. The golden ball winner also said that this world cup has been one of the happiest times of his career.

Diego Forlan won the golden ball award followed by David Villa of winning nation Spain who came in second. Holland’s Wesley Sneijder became third. Besides the golden ball, Germany’s Thomas Muller was awarded the Best Young Player award and Spain’s captain Iker Casillas was handed over the Golden Glove award which is a bonus to him beside the world cup winners medal.