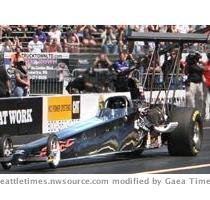 KENT (GaeaTimes.com)- NHRA veteran Mark Niver died a tragic death on Sunday during the NHRA Lucas Oil Drag Racing series that was held at the Pacific Raceways outside Seattle. The accident happened at around 2:15 p.m. when the racer’s car crashed after it touched the finishing line and went straight to hit the netting. The event was halted for around two hours during which the King County Sheriff’s Department officials investigated the crash. Although the Department confirmed the news of the death of Mark Niver it refused to divulge any further information on the matter that is still being investigated. The exact cause of the death of Mark Niver is not yet known. The racer’s family was at the arena when the incident took place.

Mark Niver who owned a machine shop in Phoenix was competing in the Top Alcohol dragster class and was leading the semi final race. However, towards the end of the round it seemed that the Parachute failed to function properly and before Mark Niver could take any other action, the car that was racing at speed of 271 mph shot off the runoff area and hit the security netting and buckled. The parachute reaped away from Mark Niver’s car where it was deployed.

The whole tragic incident overshadowed the rest of the event and during the price giving ceremony each of the winners remembered Mark Niver as great racer and person. Cory McClenathan who won the Top Fuel race remembered Mark Niver as a “great competitor” and said that the incident has shocked him to the core. The Funny Car race was won by Tim Wilkerson and The Pro Stock race went in favor of Greg Anderson.