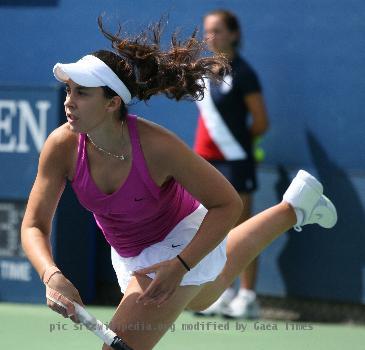 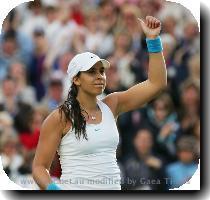 STANFORD, Calif. — Victoria Azarenka beat defending champion Marion Bartoli 3-6, 6-3, 6-3 on Friday in the Bank of the West Classic quarterfinals, ending the Frenchwoman’s run of eight straight victories in the event.

“Every single game was tough,” Bartoli said. “It was hard to win some easy points because I was fighting and running so much. This was a very high quality game and she just was a little better than me. She was beating me easily the last three times, so there was some improvement.”

Azarenka advanced to her fourth semifinal of the year. The 18th-ranked Belarusian will face top-seeded Samantha Stosur, a 7-5, 3-6, 6-3 winner over No. 7 Yanina Wickmayer.

Stosur, from Australia, is playing in her first tournament since breaking into the top five in the world. She leads the tour with 37 wins this year.

“She has improved her game,” Azarenka said. “It was a very tough game. It was important to change the rhythm with her and make her move.”

Bartoli was up 2-0 in the second set, but Azarenka won seven consecutive games to take control of the match.

“She started the match well, was hitting hard and making so many winners,” Azarenka said. “I was trying to stay out there and find my game. It finally went my way.”

Azarenka, who turns 21 on Saturday, improved to 17-5 on hard courts this year. All three of her career titles have been on hard courts.

“We’ve had a couple of close matches and there were some where she absolutely killed me,” said Stosur, who reached her sixth semifinal of the year. “The way she plays gives me problems but my game is different than the last time we played.”

Third-seeded Agnieszka Radwanska of Poland beat Belarus’ Maria Kirilenko, 7-5, 6-0, in another quarterfinal and, as a result, projects to move back into the top 10 when the rankings are released next week.

“I think the first set was the key in this match,” Radwanska said. “It was very close, very long and I think she was upset losing that first set. I felt much more comfortable in the second set, knowing that I was one set ahead. But you still have to be very focused up until the last point.”

A disheartening day for Oudin, Roddick, Azarenka at a hot US Open

Oudin, Roddick lose and Azarenka falls at US Open NEW YORK ? One woman's exit from the U...

Player collapses on court at US Open; Oudin out NEW YORK ? The scene was simply scary: V...

Azarenka collapses, has to be wheeled off court at steamy US Open

Azarenka collapses, has to be wheeled off court at hot Flushing Meadows