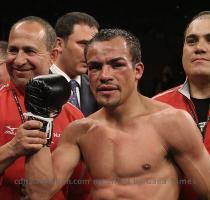 LAS VEGAS (GaeaTimes.com)- The Saturday night fight between Juan Manuel Marquez and Juan Diaz at Mandalay Bay Events Center turned out to be an interesting one with the former taking to the squared ring for the first time after his defeat in September 2009 against Floyd Mayweather. Juan Manuel Marquez came up with some amazing moves and punches and was able to hold on to the WBA and WBO lightweight titles with the unanimous decision turning on to his favor. Juan Manuel Marquez is now looking for a combat with Philippines’ Manny Pacquiao.

Juan Diaz said to media sources that he had intended to set a more measured pace but his plans were marred by his opponent. However, he maintained that he had put forward his best in the play adding at the same time that Juan Manuel Marqueze is a great fighter.