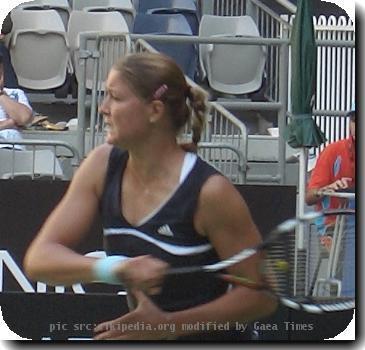 Stosur, the No. 2 seed, used her powerful serve to control Oudin. The Australian also broke Oudin’s serve late in both sets en route to her second-round win.

“I felt like at the start I wasn’t timing the ball as well as I wanted to,” Stosur said. “But as the match went on, I felt like I played better and better. I dictated and thought I served well. Overall, I was very happy.”

Stosur, who had a first-round bye, is coming off a semifinal showing last week at the Best of the West Classic, where she lost to eventual champion Victoria Azarenka. Oudin lost to Azarenka last week in a second-round match.

“I’m feeling confident,” Stosur said. “I think I’m going along the right path to, hopefully, having a good U.S. Open.”

Oudin, who made a run to the U.S. Open quarterfinals last year, never really got into the match against Stosur, the world’s No. 5 player.

“I thought I played pretty well,” said Oudin, ranked No. 45. “She’s five in the world and I was right in there with her the whole time. I’m not going to get down on myself.”

Top-seeded Jelena Jankovic of Serbia is scheduled to play her first match against Russia’s Alisa Kleybanova in a night match.

Oudin broke in the fourth game of the first set for a 3-1 lead. But Stosur took control with consecutive breaks against Oudin’s serve plus holding her own serve twice to go ahead 5-3. In the sixth game, Stosur served consecutive aces, including one at 113 mph.

“Sam is pretty much an extremely tough opponent for me, especially because of her kick serve and her serve,” Oudin said. “It’s really, really tough to break her. It puts a lot of pressure on my serve because I know that I have to hold.”

Stosur, who lost to Francesca Schiavone in this year’s French Open finals, used the only break of the second set to take a 4-3 lead.

In other second-round matches, fourth-seeded Agnieszka Radwanska of Poland defeated Russia’s Dinara Safina 6-1, 6-3, and No. 7 seed Shahar Peer of Israel advanced with a 7-5, 6-4 win over Kazakhstan’s Yaroslava Shvedova.