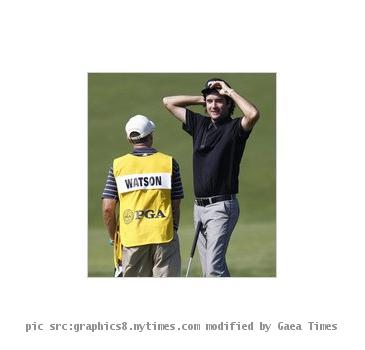 HAVEN (GaeaTimes.com)- Bubba Watson ensured he is as entertaining with the microphone as he is with the driver when he spoke about everything except the game on the post game conference on Thursday. In spite of the questions diverting towards the course, the delays and the game play of the day, Bubba Watson kept things light and funny and sometimes even emotional during his interview. The self taught golfer and co leader of the 1st round of the PGA Championship on Thursday, explained to the media that he takes advice from God and only his wife as she is the boss.

In spite of facing a three hour delay Bubba Watson looked unperturbed and in high spirits during the game on Thursday. With a 4-under 68 score, the untrained 31 year old golfer birdied six holes and bogeyed two to ensure his place at the top. After the game he entertained the media in what was a roller coaster emotional ride for him as well as the audience. Instead to showing any displeasure at the delay, Bubba Watson said that he played the game ‘Angry Birds’ on the phone and also threw stuff at Ricky Fowler while he was trying to sleep. He became serious only when he started to talk about his wife.

Bubba Watson’s wife is a professional basketball player and he revealed in the interview that she was diagnosed with a tumor during Christmas last year. He said that later it was found to their relief that she merely had an enlarged pituitary gland which is common for very tall women.