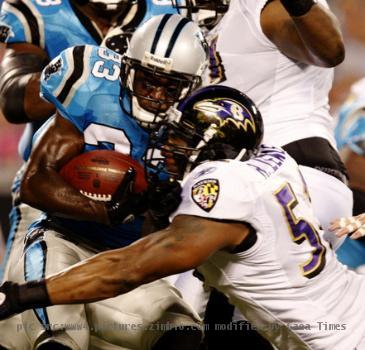 CAROLINA (GaeaTimes.com) — Even as the Carolina Panthers lost to the Baltimore Ravens, there were a lot of positive aspects to their performance. The final score was Baltimore 17, Carolina 12 but the game was never one sided.

Jimmy Clausen looked in really good shape for his debut game for the Carolina Panthers. He seemed to be very aware of the match situation and made a few good passes. Matt Moore’s performance was not extraordinary but was not horrible either. Jordan Gross had a very bad day in the field. He is considered as one of the best left tackles in the NFL but he got called for 3 penalties within the first 12 minutes. Anthony Fiammetta the replacement to the ever dependable fullback Brad Hoover was convincing in his blocking and tackling. The rookie Armanti Edwards also looked to be a potential future offensive spearhead.

Fans of the Carolina expect a resurgent squad once the actual NFL starts. They will have to improve their game if they want to pose a serious threat to the other teams of the NFL. Their defense needs a lot of work especially as there are no Big names in their defensive line.

In related news Chicago Bears acquired ex Carolina Panther linebacker, Kevin Smith. He will assume the role of wide receiver Antonio Robinson in his new team. We will keep you updated as we get more information regarding the deal.