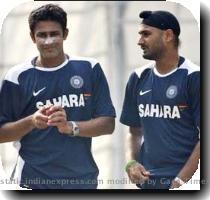 “With this, the number of Arjuna Award winners in the airline will touch 32. The airline also has two Padma Shri and three Rajiv Gandhi Khel Ratna awardees,” he added.

Air India has played a stellar role in promoting sports in the country for over the last four decades and has some of the finest athletes in various disciplines on its rolls.

Jhulan Goswami, captain of the Indian women’s cricket team, was awarded the ‘ICC Woman Cricketer of the Year Award’ in 2007 for her outstanding performance. She is the first Indian woman cricketer to receive the honour. She is employed by Air India as customer services supervisor at Kolkata.

Dinesh Kumar, seasoned kabaddi player, has brought laurels to the nation with sterling performances in the World Cup 2007 and Asian Games 2006, where he won gold medals. He is senior vigilance inspector at Delhi.

Parimarjan Negi became chess Grand Master at the young age of 13, the second youngest ever in the history of the game. He acquired the International Master title at the age of 12. He has to his credit several medals and titles in various prestigious international championships.