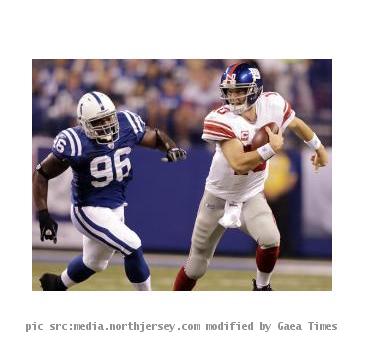 INDIANAPOLIS (GaeaTimes.com) — Who would have thought that the match last night between the Giants and the Colts would be remembered as the duel between the two Manning brothers? Peyton Manning and the colts routed the Giants of Eli Manning with a forceful display of Football. Father of the two athletes Archie Manning might be concerned about the rivalry that was on display.

Their 124 yards rush in the 1st half was enough to send shockwaves through the Giant’s camp. Before they could recover from the onslaught the Giants were staring at a 24-0 scoreline at half-time. They did manage to get their names in the score sheet with a final score of 38-14 but that was really too little and late. Giants coach Tom Coughlin said that

I told our players that they outplayed us and out-executed us. And this was a team that did not play well last week, but obviously they worked hard all week to get better.

He also sounded perturbed by Brandon Jacobs. Tom said that he would be better off heading north during the game instead of running sideways.

It looks that the Giants have been dwarfed suddenly. Notably Eli Manning was not able to complete a pass till the the first half was almost over.