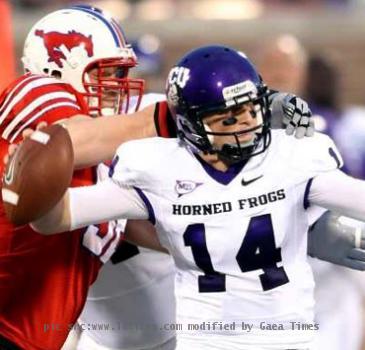 DALLAS (GaeaTimes.com)- Although the Southern Methodist University (SMU) team on Friday night came up with some good defense and offense work at the Gerald J. Ford Stadium against the fourth seeded Texas Christian University team, the former failed to make an impact as the latter won the game with an impressive 41-24 lead. However, it would be wrong to say that the win of TCU over SMU was a cake walk for the former as the latter put its best foot forward and fought till the end.

The game turned out to be an interesting one for the large crowd that gathered at the stadium. From the very beginning of the game, both the teams emerged with some good speed. Although TCU lost its top rusher Ed Wesley midway through the second quarter, it was seen emerging with a wonderful offense later on. However, just minutes into the third quarter of the game, the SMU got the opportunity to lead by three points when Andy Dalton’s interception led to a touchdown that left TCU trailing by 17-14.

The lead however, was short lived as the TCU came up with a great speed and went for some quick successive touchdowns. Safety Jeremy Kerley came up with an 83 yards kickoff to lead the team once again. Following it, Andy Dalton threw an 11-yard touchdown pass and the TCU was once again leading over the SMU. The score board read 21-17 in favor of TCU. Towards the end of the game, although the SMU defense tried its best, its speed seemed to wither out as the TCU offense became all the more aggressive. After the loss, SMU coach June Jones said that the team needed to have utilized each and every opportunity that came its way during the game to secure a win against a team like TCU.