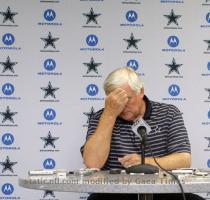 IRVING, (GaeaTimes,com)- Ever since Dallas Cowboy had a humiliating defeat to the Green Bay Packers on Sunday, there has been speculations about the possibility of coach Wade Phillips to get fired. Although nothing was revealed by the owner of the team Jerry Jones, until yesterday noon, he gave his final verdict yesterday evening. Jerry Jones has decided to replace Wade Phillips with Jason Garrett and Paul Pasqualoni.

The Dallas Cowboys have never been very consistent about retaining their coach for too long. Ever since Barry Switzer left in 1997, the team has already changed four coaches namely Chan Gailey, Dave Campo, Bill Parcells and finally Wade Phillips. After he was fired, Jason Garrett was declared as the new offensive coordinator and Paul Pasqualoni would be the new defensive coordinator. While appointing Wade Phillips, Jerry Jones thought that his defensive expertise would be good for the team, but that was remotely proved in the last three games. Wade Phillips is known for his polite and humble approach. Although he is loved by the Cowboys, the team and its owners felt the urgent need to replace him immediately. The team had a fifth straight loss on Sunday, and now stands at a score of 7-1. There are still eight more games to go and Jerry Jones feels there are still some narrow chances for the team to get back its reputation. Therefore, for the first time Dallas Cowboys, in the history of the team, a coach was fired in the middle of the season.

The team members feels that since Wade Phillips has been fired, the condition of the team has some chances of getting better, Although is is amazing as a defense player and an amazing defense assistant for several teams, but for some reasons he failed to prove his worth as a coach. However, his dismiss would not reduce the respect he has earned as a human being, feels the players.