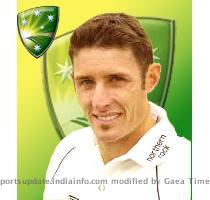 BRISBANE, AUSTRALIA (GaeaTimes.com)- England made a strong comeback into the first test of the Ashes 2010 with regular wickets throughout the 2nd day. Though Michael Hussey and Brad Haddin have steadied the ship for the Australians, the English bowling as shown enough promise to make the match a nail-biting. Batting at 220/5 with 10 overs still left to go till the end of the day, another wicket or two could again make the match evenly poised.

James Anderson and Graeme Swann have been the pick of the bowlers for England so far. James Anderson took the two crucial wickets of Shane Watson and Ricky Ponting. When Australia crossed the 70 run mark with all the wickets intact, it looked like England were heading towards another Australia dominated day. Soon after the fall of the first wicket, Australian skipper Ricky Ponting had a rather unfortunate dismissal when he tried to glance a ball down the leg side only to edge it to the keeper. Wickets began to fall at regular intervals and soon Australia found themselves in trouble with 5 wickets down for 143. Marcus North struggled again due to his lack of form and a slow turner from Graeme Swann turned out to be too much for the middle order batsman who edged it to the slip.

The latest reports indicate that rain has stopped the days proceedings with Australia batting on 220/5. While Michael Hussey scored a well paced 81*, Brad Haddin played the perfect foil to his partner and ensured that he did not throw away his wicket. England will look to make the most of the disruption and try to bad quick wickets if the weather allows any further overs on day 2.