Gator Bowl To Hit On January 1 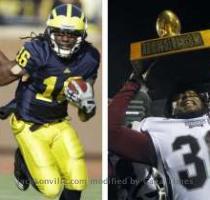 JACKSONVILLE (GaeaTimes.com)- The Gator Bowl, through an unanimous voting, decided to invite Mississippi State University and Michigan to play for them on January 1. This came up as a big new for all the fans of Mississippi as for the first time since 1998, they will be starting the year with a Bowl game. However, they are also concerned about the challenge that they have to face against their competent opposition, Michigan, who has won 884 matches and is regarded as one of the strongest teams in the college football.

Michigan got the Gator bid ahead of Iowa, although they finished the match behind the Big Ten rankings, after they lost to Hawkeyes. Their coach Rich Rodriguez, will be coaching his team for the Gator Bowl for the first time in three years. However, for the team, it would be the 40th bowl game in its history. Rich Rodriguez feels that it would be a great match to play as Mississippi is a good team to compete with and has consistently ranked among the top-25 this season. He also complemented the Gator Bowls for hosting the teams and making the bowl experience a memorable one for the players. Their athletic director Dave Brandon said that they have worked hard for the whole season and at the end the invitation from the Gator Bowl came up as a big reward. On the other hand, this would be the first visit of Mississippi to the Gator Bowls.

Gator Bowl President Rick Catlett said that the real winners of this bowl would be at Jacksonville. He expects the economic impact of the Gator Bowl game to be big enough. This is because, they have already sold 74,000 out of the 77,000 tickets.

Fearless cat sends alligator packing with one strike of its paw

LONDON - A brave cat stunned onlookers at a park in Louisiana when he decided to square up to a fero...

Dandy Dozen: 12 college football towns that even a non-football fan can enjoy

As No. 12 LSU visits a Florida squad adept at interceptions, Lee looks to show he's changed

SEC West flexing its muscle against the EastLEXINGTON, Ky. — There's a new hierarchy in the Southe...

A twist of fate for No. 22 OSU at LafayetteSTILLWATER, Okla. — Mike Gundy was a freshman riding th...

Instant Replay: This SEC does not look up to task of stopping Alabama express

Instant Replay: Alabama separates from SECTUSCALOOSA, Ala. — Nick Saban saw the team he wants No. ...

Alabama and Oregon pull away, Oklahoma and LSU survive Sort'em Out Saturday