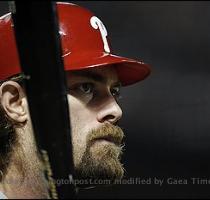 LAKE BUENA VISTA (GaeaTimes.com)- It seems that after losing Adam Dunn the Washington Nationals are treading upon carefully. This is what their latest action showcased after last evening they signed in free agent Jayson Werth for a lucrative $126 million deal over a period of seven years. The action came up early before the winters meetings actually begun. They roped him early after they received a blow early this month after Adam Dunn left them for the Chicago White Sox.

This is the perfect start for the Major League Baseball’s Winter meetings. The 31 year old All-Star right fielder from Philadelphia is also said to be very elated with his handsome deal. The meetings and contracts are scheduled to begin from today but proceedings begun as a result of the early gatherings of the team managers and officials in Lake Buena Vista. A source present at the venue revealed that the Washington Nationals were impatient to get their hand on Jayson Werth as they did not want to encounter any more blows at any cost and announced the news of the contract even before the ballroom was fully decorated. Washington Nationals manager Jim Riggleman said that even he was not aware of all this until a few hours back. The proceedings of the deal were strictly kept under the wraps before it was announced publicly by the Nationals.

However, there have no no news from the side of the Philadelphia Phillies who has been robbed of one of their best slugger. According to sources, the length of the seven year contract has also been subjected to criticisms after many felt that Jayson Werth had not reached that level of his career where he ought to get such a handsome deal.

Larsen has some company after Halladay's no-hitterPHILADELPHIA — Roy Halladay finished his warmup ...

Cox not finished yet after Braves win NL wild cardATLANTA — Nothing has come easy for the Braves, ...

Indians sweep doubleheader from Tigers, 4-0 and 4-3, extend winning streak to 6