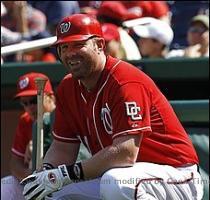 Ryan Zimmerman, the third baseman of the Washington Nationals and the face of their franchise told the media that he was undoubtedly sad to lose Adam Dunn, who is one of the most popular players both with the fans and with his team. However, Ryan Zimmerman expressed happiness at the same time for he sternly believes that Adam Dunn is getting what he deserves. Some time back both Adam Dunn and the Washington Nationals player had expressed a desire for a contract extension but the case remained pending following which the baseball star decided to move on.

BHUBANESWAR - The Orissa assembly was adjourned several times Tuesday, on the first day of its winte...

Press Conference of the President after NATO Summit