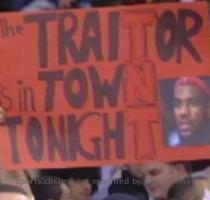 CLEVELAND (GaeaTimes.com)- Lebron James returned to Cleveland in a game against the side that helped him achieve super-stardom in basketball. While the crowds chanted profanities and booed every time he touched the ball, LeBron James managed to keep his cool in the Cleveland Cavaliers Vs Miami Heat game on December 2.

Miami Heat started the game well and LeBron James scored just 4 points in the first 8 minutes of the game. Soon however, the Miami Heat began to assert themselves in the game and the charge was led by none other than the son-turned-villain of Cleveland, LeBron James. Miami Heat took advantage of the lead that they got in the first quarter and finished the first half with a comfortable 59-40. The third quarter could well be called the LeBron James quarter as he scored a whopping 24 points in it, and almost took the game away from the Cleveland Cavaliers.

LeBron James almost sat out the entire last quarter as Miami Heat capitalized on the great lead. Finishing at 118-90, LeBron James managed to quieten the crowd that booed him every time he touched the ball in the first half. During half-time, LeBron James said that he had a lot of love for the fans in Cleveland but the crowd did not seem to be reciprocating any of the love as they put up signs calling him a ‘traitor’ and also wearing T-shirts that read ‘Lyin’ King’. The game between the Cleveland Cavaliers and Miami Heat received huge amount of hype and the players themselves felt that the game would go down in history. Considering that LeBron James scored a game high 38 points, not many of the Cleveland Cavaliers fans would want to be reminded of the scores.

Wipro Infocrossing to set up new data centre in US

BANGALORE - Wipro's IT infrastructure management services subsidiary Infocrossing will set up a new ...

LONDON - A research has found that teenagers who send more than 120 text messages a day are more lik...

LONDON - Teenagers who text 120 times a day are nearly three-and-a-half times more likely to have se...

Ice-baths can do more harm than good, say scientists

LONDON - A new study has suggested that ice-baths can actually do more harm than good. The agonisi...

Press Conference by the President

Remarks by the President and the Vice President at DNC "Moving America Forward" Rally in Cleveland, Ohio

CLEVELAND (GaeaTimes.com)- While on the first match Miami Heat disappointed its fans by losing t...
Copyright© 2010 The Gaea Times