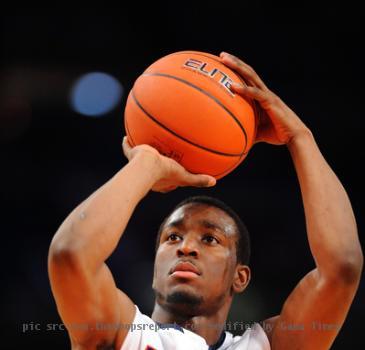 LAHAINA (GaeaTimes.com)- Last night Maui Tournament saw Connecticut Huskies taking away the trophy after beating Kentucky Wildcats in Hawaii. Kemba Walker, the point guard of Connecticut University shined on the court scoring 29 points for his team. When asked, he said that he had fun on the court as his team was dominating on the court from the first half.

Kemba Walker gave his best to score as many points as possible and thrashed the opponent. It was a 84-67 win for the team and Alex Oriakhi had 18 points and 11 rebounds in the favor of the team. From Kentucky Wildcats, Terrence Jones scored 24 and another player Darius Miller added 15 to the team’s score but in the end failed to make his team win. After the game Kemba Walker said that his team wanted to show that their university is still one of the best and given any oddities, they will be able to come out of it with flying colors. Jim Calhoun, University of Connecticut’s coach said that the victory once again proved that they are still considered to be a good team in the college basketball field.

University of Connecticut won their much coveted trophy in 2005 against Arizona Wildcats and this is the second time they won their trophy. Kentucky Wildcats’ coach John Calipari said that the whole experience was “shellacking”. He said that though his team performed well but in the end it seemed that the team “outplayed” and could not perform their best against Connecticut Huskies. The crowed cheered for Kemba Walker as his team won against the Kentucky Wildcats. John Calipari said that Kemba Walker acted as a catalyst for his team to win the trophy

Walker's career-high 29 leads Connecticut to 84-75 win over No. 3 Villanova