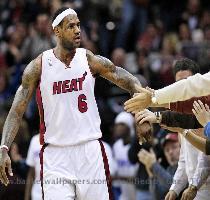 CLEVELAND (GaeaTimes.com)- In what was by far one of the most anticipated matches of the NBA season this year, the Miami Heat took on the Cleveland Cavaliers on December 2. The hype surrounding the match reached epic proportions especially because Cleveland’s son-turned-villain, LeBron James, would be playing in the city where his jersey’s were burnt and people on the streets erupted in anger six months ago when he announced his transfer to Miami Heat. Though the authorities tried their best to keep out most of the offensive signs and T-shirts, some of them managed to make their way into the court.

In spite of the catcalls and the constant boos that ensued every time LeBron James touched the ball, the NBA star managed to keep his calm and keep up with his usual performances. The audience appeared as if they were waiting for the player’s return to their city to vent their anger. One poster showed a photo of LeBron James on the CoverGirl magazine and one T-Shirt even read ‘Lyin’ King’. Among some of the more offensive posters and signs that made it into the court, there was one that read ‘The traitor is in town tonight’.

Some of the fans also expressed their feelings with the help of the letters that were printed on their T-shirts. 8 Cleveland Cavaliers fan stood side by side and the letters on their T-shirts spelled ‘BETRAYED’. The intention was clear and the result of the game almost insignificant. Miami Heat, however, dominated in the first half of the game and led 59-40. LeBron James looked in top form and managed to smile through all the boos and profane chants aimed at him.

MIAMI, (GaeaTimes.com)- Sometimes 'On field Rivalry" can even go "Off Field" and these days, t...

NEW YORK - US President Barack Obama may be the leader of the free world, but he is not even close t...

LOS ANGELES, (GaeaTimes.com)- Haters might hate it, as it would prick them to the core, bu...