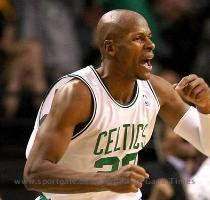 BOSTON (GaeaTimes.com)- In what was one of the most anticipated games for the Miami Heat fans turned out to be a damp squib as the Boston Celtics showed incredible resilience and strategy to finish with the final score of 88-80 in their favor. In spite of most NBA experts saying that the Miami Heat side had become almost invincible after the inclusion of LeBron James and Dwayne Wade into the side, the Boston Celtics proved that there was more to the game than just star power. Ray Allen, who scored 20 points in the game was all praises for the defense when he spoke to the media after the game.

Ray Allen explained that his defense formed a great ’swarm’ that became almost impenetrable for the Miami Heat attack. He added that the players were in perfect position and knew almost all the plays by the Miami Heat. In spite of the excellent strategy implemented by the Boston Celtics, LeBron James scored the game high of 31 points. His fellow forward, Dwayne Wade, however, failed to make any impact in the game and scored merely 6 points. Rajon Rando and the rest of the Boston Celtics defense were placed almost immaculately to ward off most of the attacks by the Miami Heat players.

Ray Allen said that there was a slight gap in the defense which allowed the Miami Heat to score some 3s from one particular spot. The Boston Celtic will play the Cleveland Cavaliers on Wednesday evening and it will be interesting to see the side perform for the first time in years without LeBron James in the attack.