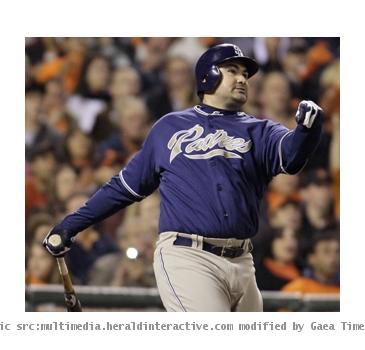 BOSTON (GaeaTimes.com)- Slugging first baseman Adrian Gonzalez is all set to join Boston Red Sox after the team in the final stages of edging a contract with San Diego Padres, according to sources. It has been reported that the Boston Red Sox has received the requisite permission from the Major Baseball League to undertake negotiations on the all-star player. If the reports about Adrian Gonzalez’s acquisition by the Red Sox indeed turn out to be true then it would be the most significant trade of the team after Curt Schilling was acquired in the year 2003. Although any official confirmation from the team has not been forthcoming as yet, sources who are well-acquainted with the deal have revealed, on condition of anonymity, that the negotiations are in their ultimate stages.

The all-star first baseman supposedly underwent a physical test at the Massachusetts General Hospital over the weekend which is one of the most important steps towards finalizing the trade contract between the Boston Red Sox and San Diego Padres. Sources have divulged that now the only hurdle in finalizing the negotiation was to come up with a multi-million dollar contract by Adrian Gonzalez’s agent John Bogg and the Boston Red Sox.

According to the contract that is reportedly been worked out between the Boston Red Sox and the San Diego Padres, in exchange of Adrian Gonzalez, Padres will receive around three players from the Red Sox which includes first baseman Anthony Rizzo, pitcher Casey Kelly as well as outfielder Reymond Fuentes. Moreover, another player would be traded to the San Diego Padres whose identity would be revealed later, insiders have said.

10-yr-olds should be allowed to apply for gun licenses: Police chief

LONDON - Britain's most senior firearms officer has suggested that children aged 10 and above shoul...

MELBOURNE - Qantas' A380 flight QF32 passengers and crewmembers were "very, very lucky" that the hig...

LONDON - A survey of iPhone users has found that Welsh singer Charlotte Church is the celebrity Brit...

GALLE, SRI LANKA (GaeaTimes.com)- A 'Gayle' swept over Sri Lanka and the worst affected by the...

WASHINGTON - Elderly people who take brain training sessions avoid the risk of car collision by half...

SYDNEY - Doctors and scientists in Britain have claimed that people can soon diagnose sexually-trans...

LONDON - A caravan owner whose vehicle was stolen succeeded in spotting a suspect while looking at h...

ROME - Lazio remained at the top of the Italian Serie A Sunday, winning 1-0 at Palermo although they...

LONDON - An angry footballer who tried to mow down the referee by driving onto the pitch is now fac...