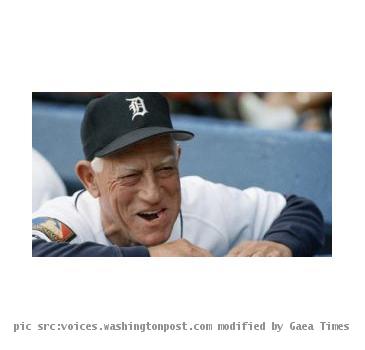 more images
THOUSAND OAKS (GaeaTimes.com)- The world of baseball lost one of its greatest characters on Thursday. After being in hospice care for just about a day, Major League Baseball manager George ‘Sparky’ Anderson breathed his last yesterday at his home in Thousand Oaks in the state of California. The Hall of Famer manager who was known for his illustrious association with the Major League Baseball for more than two decades, was 76-years-old at the time of his death.

The former Cincinnati Reds manager is known to have been suffering from dementia for the past few years and the cause of his death has been attributed to complications arising from the condition. On Wednesday, his family has made the announcement that Sparky Anderson has been placed under hospice care due to his deteriorating condition from dementia. The 76-year-old veteran Major League Baseball manager is survived by his wife Carol, two sons, a daughter as well as nine grandchildren. The news of Sparky Anderson’s death has left his fans across the nation as well as in the baseball fraternity devastated with many of them reiterating that with the passing away of the Hall of Famer manager, an era in the baseball world has come to an end.

Following Sparky Anderson’s demise, a statement was released by Mike Illitch, who is the owner of Detroit Tigers which read that the Hall of Famer manager’s success with Detroit Tigers as well as with Cincinnati Reds, was not just about winning and losing but it was about the character of man. The Tigers owner further added that Sparky Anderson is known to have put his heart and soul into the baseball community and so he was loved by the players and the fans alike.