Giants Parade Live : Where to Watch? 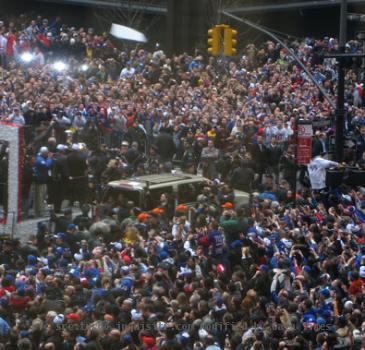 SAN FRANSICO (GaeaTimes.com) — The San Francisco Giants will celebrate their World Series victory over the Texas Rangers today with a ticker-tape parade beginning at 11 a.m. PDT and fans are expected to clog the downtown streets of The City by the Bay.

The parade starts at Montgomery and Washington streets in the Financial District and heads about 20 blocks on Market Street to Civic Center Plaza for a celebration and presentation of a key to the city by the mayor. It’s the same route the team took in 1958 when the city celebrated its move from the Polo Grounds in New York to San Francisco.

Edgar Renteria blasted a three-run homer on Monday that helped the Giants capture the 106th Fall Classic. The 35-year-old Colombian shortstop, who was named MVP, joins an elite list of just three other players Lou Gehrig, Joe DiMaggio, and Yogi Berra who have driven in the game-winning run in the deciding game of two different World Series.

To check out live footages or even recorded videos of this parade, you can check out at FOX40.com.