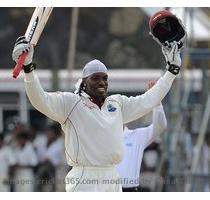 GALLE, SRI LANKA (GaeaTimes.com)- A ‘Gayle’ swept over Sri Lanka and the worst affected by the disaster was the Sri Lankan cricket team. Chris Gayle proved yet again that he is one of the few batsmen in the world who can break the opponent’s back single handedly. With Sri Lanka starting off as favorites in the first WI vs SL test against West Indies, the Kolkata Knight Riders opener gave an almost match-winning start to the visitors.

Winning the toss and choosing to bat first, the West Indians got off to a steady start courtesy Chris Gayle and Adrian Barath. The two made a rather fast paced century stand and soon the Sri Lankan bowlers began to appear hapless against Chris Gayle. After the dismissal of Adrian Barath in the 25th over, Chris Gayle and Darren Bravo looked to consolidate on the strong start and Chris Gayle kept the scoring rate healthy in his signature effortless style. He reached his hundred in just 116 balls and it looked like he had just started playing at that time. The opener reached his double century as effortlessly and the Sri Lankan bowlers are sure to have a sleepless night and jittery morning on Day 2 of the first WI vs SL test.

Chris Gayle broke out after he crossed the triple digit mark and all that the Sri Lankan fans could hope was for the day to end soon. Chris Gayle tore open the Sri Lankan bowling that seemed to miss the likes of Muttiah Muralitharan and Chaminda Vaas. Suraj Randiv who performed well against India, became one of the main targets of Chris Gayle who smashed him for a total of 5 sixes and 14 fours throughout the day. At the end of Day 1 of the WI vs SL test, the West Indies were batting at 362/2 with Chris Gayle not out on 219.

LUCKNOW - Alarmed by a spate of on-campus suicides, the Indian Institute of Technology, Kanpur is to...

Which E-Reader You Choose for Holiday: Kindle, Nook or Sony Reader

E-readers are expected to catch many eyeballs during the upcoming holiday season. For me, it is not...

LONDON - Google has agreed to delete all personal data collected by its Street View cars from unsecu...

DELHI, INDIA (GaeaTimes.com)- It seems what the Apple said about the dominance of the iPad is tu...

A Printer For The iPhone and Why Should it Fail

Air Print is the latest in the series of increasingly odd assortment for extensions to the IOS d...

Apple seeds iOS 4.2.1 the Latest Installment of iOS 4.2 to Developers

Well this may not probably be the iOS 4.2 announcement that you were eager to listen to, but no ...

Are you going to get yourself a Samsung Galaxy Tab, why not check out the facts and features first. ...

LG L-03C gives the look and feel of being a cross between an early version of a compact camera a...

NEW DELHI, INDIA (GaeaTimes.com) -- It's turn for the Motorola now to launch a new Android phone in ...

JALANDHAR - A private university here has seen a surge in the number of foreign pupils, especially f...
Copyright© 2010 The Gaea Times