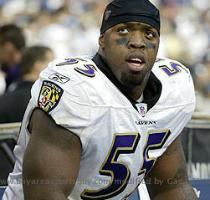 SAN FRANCISCO (GaeaTimes.com) Recently Terrell Suggs came up accusing the National Football League of being biased. The Baltimore Ravens linebacker went to say that the NFL is not bothered about the rest of the players apart from two who are its favorites. He did not hesitate for a minute to name Peyton Manning and Tom Brady as the two players who are the chosen ones to be privileged inside the NFL domain.

The 28 year old Baltimore Ravens linebacker vented his agitation against the National Football League by saying that the league has its own set of favorites and does not pay heed to the other players. It was evident how much disgusted Terrell Suggs is with the NFL after he said that the league only frames rules to protect its darlings, otherwise when there is any serious issue about the others it seems to be dormant. Interestingly, this statement came up in context of the incident of Carson Palmer’ hit in the knee, for which Terrell Suggs claims that there was no action taken, whereas when Tom Brady of the New England Patriots was in the same situation there were endless rules, suspension threats and fines declared out by the NFL. however, there have been contrary reports claiming that NFL did took action even at the time of Carson Palmer, while the rules were strengthened all the more at the time of Tom Brady.

Terrell Suggs went to say that while some some quarterbacks where easily getting calls others have to keep on waiting. He even defended Pittsburgh Steelers linebacker James Harrison saying that he did not deserve a red card adding that the NFL have wrongly fined him $25,000.

LONDON - 'Blade' star Wesley Snipes has been ordered to serve a three-year jail sentence for a felon...

Say what? Trash talking alive and well in NFLNEW YORK — The insults spread around the Jacksonville...

TO shows he's still got a lot left at age 36CINCINNATI — With one big game, Terrell Owens made his...

Colts fall and Rams win second in a row, leaving both among several at a mediocre 2-2

Colts, Rams among several with mediocre 2-2 marksProgress for the St. Louis Rams at 2-2 is distress ...
Copyright© 2010 The Gaea Times