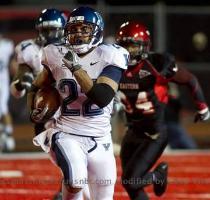 CHENEY (GaeaTimes.com)- The Eastern Washington Eagles have finally made it. Yes, the Eagles are just a step away from winning the Football Championship Subdivision championship title. Last night, the Eastern Washington Eagles defeated the Villanova Wildcats in the semi-final by 41-31 making their way for first time to the FCS final. They will compete for the final next year on January 7. The team that they will face in the finals will be the winner of the game between Georgia Southern and Delaware.

This is the first time that team Eastern Washington has been able to make it to the finals of this football championship. The credit for this success undoubtedly goes out to the Eagles’s Bo Levi Mitchell. He was the man who did the maximum wonder for his team as he gave his team a good support by going for four touchdowns. He ran a total of 292 yards for all those touchdowns, completing 27 of 38 yards. Mario Brown went for 104 yards with his 26 carries. Brandon Kaufman caught eight passes for 135 yards and then added a touchdown to his credit. Nicholas Edwards successfully added the two first half touchdown catches. Chris Whitney from the Wildcats threw for 95 yards. Angelo Babbaro returned the opening kickoff of 86 yards for a touchdown.

The Eastern Washington Eagles (12-2) have raised themselves to 8-0. Football experts were enthusiastically going on chanting about the outstanding performance that Bo Levi Mitchell rendered on the field. Eagles fans present at the Spokane’s Roos Field cheered aloud as their star Bo Levi Mitchell made a touchdown pass to Greg Herd on fourth down. The game last night was undoubtedly, a great one as it emerged out to be a hard fought victory for the Eagles.

For hares, variety really is the spice of life

WASHINGTON - Scientists at University of Veterinary Medicine, Vienna, have shown that genetic variab...

Fact Sheet on the United States' Relationship with the European Union: An Enduring Partnership

LONDON - Two Taliban leaders have been killed by NATO troops - on each in eastern and western Afg...

BEIJING - A worker who was trapped in a steel shaft undersea for 80 hours has been rescued, a media ...

One dead, eight trapped as Jharkhand mine caves in

RANCHI - One woman was killed as a mine caved in Monday morning in Jharkhand's coal city Dhanbad, po...

BEIJING/TAIPEI - An earthquake measuring 5.6 on the Richter scale struck off the eastern coast of Ta...
Copyright© 2010 The Gaea Times