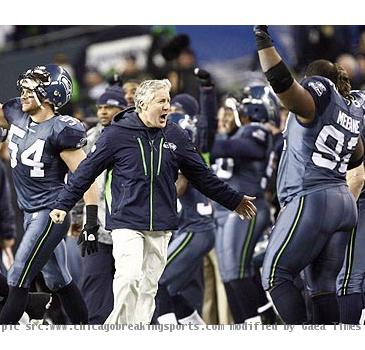 SEATTLE (GaeaTimes.com)- Those who witnessed last night’s game between the Seattle Seahawks and the St.Louis Rams saw how the former crushed the Rams going on to snatch away the NFC West Division Title at the Quest Field on Sunday. It was undoubtedly Charlie Whitehurst whose outstanding performance on the field led the Seahawks to a win by 16-6. Coach Pete Carroll for whom this was the first game as the Seattle coach was all excited and declared that the outcome was something that he had always wanted.

Spectators present at the venue saw how Charlie Whitehurst drove his team towards victory. Nobody had ever been able to guess that the quarterback who was the replacement for the injured Matt Hasselbeck would come up with such a stupendous performance. The Seattle Seahawks quarterback started off with a straight away four yard touch down to Mike Williams. Next he proceeded for a 61 yard pass to fellow Ruvell Martin. After the successful completion of this there seemed to be no stopping for the former San Diego player. He took himself to 192 yards and with this the task had already been accomplished.

By this time Seattle Seahawks fans were sure that in no way would the Rams be able to touch the line that Seahawks had already drawn. Prior to this Charlie Whitehurst was with San Diego where he hardly played in any of the matches. However, with what came up last night it sure to boost the football career of this budding talent. The game not only displayed the merits of the winning team but showcased a good number of mistakes that St. Louis Rams did for which they were mercilessly dashed down by the Seahawks.

WASHINGTON - A new study has suggested that targeted breast ultrasound should be the primary imaging...

SEATTLE (GaeaTimes.com)- The heavy snowfall in Seattle is taking a toll on the regular life of the p...

SEATTLE (GaeaTimes.com)- Monday's heavy snowfall has hit the traffic of Seattle severely. The ...

WASHINGTON - A new study has found that kids with Chronic Kidney Disease (CKD) are more likely to ha...

WASHINGTON - Pastor Cedric Miller had recently advised that some people should stay away from Facebo...

SEATTLE (GaeaTimes.com)- It is quite well known that a product which gets the endorsement of tal...

NEVADA - Various museums and art galleries of USA are providing online resources on Hinduism. These ...

WASHINGTON - Boeing has opened a new production facility near Boeing Field in Seattle for making P-8...
Copyright© 2011 The Gaea Times