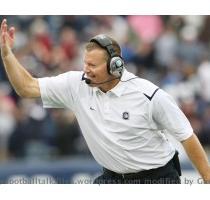 After a hunt for almost near to two weeks their search ended with none other than the man behind the success of the Connecticut Huskies. Randy Edsall is well renowned for being a defense specialist and through the last several years guided the Huskies well to make them emerge into a winning team. The 52 year old coach is also the winner of many conference titles. According to reports a press conference today will be taking place at 2 pm where the official announcement of the news will be declared. The newly appointed head coach will be appearing along with Kevin Anderson, the athletic director of Maryland Terrapins.

Before making the final decision to hire Randy Edsall, Maryland Terrapins authority officials had to consider other names as well. A source from the Terrapins camp said that Maryland had also contacted Mike Leach, Rich Rodriguez, Chris Petersen, June Jones, Gus Malzahn. However, the offer finally went to the Huskies coach. Meanwhile Randy Edsall has already met many of the players and the assistant coaches of his new team at the Gossett Football Team House.

Some songs on MJ's new album are bogus, says Randy

LONDON - Michael Jackson's brother Randy has said that some of the songs on the tragic icon's new al...

NEW YORK - You'd think that food, water and shelter were some of the important requests of evacuees ...

LONDON - The Jackson brothers are set to launch their own clothing line, which will pay homage to th...

WASHINGTON - A new study has revealed that male spiders that get to have sex only once or twice in t...

LONDON - Singer Rod Stewart has blasted Russell Brand over the latter's claim that he slept wit...

Quaids released from detention in Vancouver

TORONTO - Oscar-nominated actor Randy Quaid along with his wife has been released from detention in...
Copyright© 2011 The Gaea Times