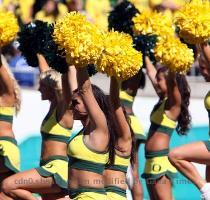 GLENDALE (GaeaTimes.com)- It were not only the Oregon Ducks players were the only one who showed up in new uniforms at the BCS title game last night. Oregon made sure that their cheerleaders too got to sport new uniforms so that an extra vigor gets added to the enthusiasm of their cheering. The girls, however, went on to do justice to their roles although the men on the field failed to put up an impressive show losing the match out to the Auburn Tigers who notched the victory from them by 22-19.

Audience could hardly control their temptations as the Oregon Ducks cheerleaders ushered on the side lines in their bright yellow dresses. The difference in their uniform was noticeable. The girls sported a new uniform which had yellow as its base with the borderlines in green. Green and yellow form the major color components of the Oregon team. The girls drew the attention of everyone as they looked extremely hot in the yellow and green sports bra and micro-mini skirts. The idea behind the new dress as usual was that of Tinker Hatfield of Nike who is known to be the brain behind the Oregon Ducks’ uniforms. The designer had indeed given a prominent cutting edge designs to the girls’ uniforms.

However, it seemed that Tinker Hatfield’s ideas were not enough to draw in victory for the Ducks’. The players were seen getting passive during the second and third quarter of the game and the new uniform did not seem to do much wonder to the players. We wonder if it were the hot Oregon Ducks cheerleaders who had added to their distractions with their bright new cutting edged uniforms!

WASHINGTON - Scientists have stumbled upon life teeming with versatile bugs in the deepest layers of...

WASHINGTON - Scientists have discovered bacteria with a remarkable range of capabilities, in...

LONDON - Just when you thought we had discovered signs of life everywhere possible on Earth, a new e...

What makes one city better than another?

WASHINGTON - A research team has concluded that in terms of size, New York is just an average city...

WASHINGTON - Researchers, who examined the interactions between wolves and elk in the United St...
Copyright© 2011 The Gaea Times