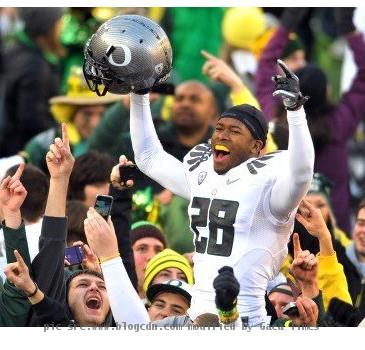 ATLANTA (GaeaTimes.com)- The two teams that would qualify for the BCS National Championship have been finalized yesterday, with the victory of Auburn Tigers over South Carolina with the score of 56-17, and the victory of the Oregon Ducks over Oregon State with a score of 37-20. The two winning teams, Auburn Tigers, with BCS no.1 ranking and Oregon, with no.2 ranking will clash on January 10, at University of Phoenix Stadium, in Glendale, Arizona.

The BCS National Championship will take place at 8:30 p.m. ET, and will be aired on ESPN, ESPN 3D, ESPN 3. The three announcers who have been assigned for the event are Brent Musburger, Kirk Herbstreit, Erin Andrews. This would be very special match for both the teams as they, for the first time were able to qualify for this esteemed match. Nick Aliotti, the coach of Oregon Ducks said that they are just persevered with such a quality team. The ducks defeated the Beavers to finish 12-0. While on the other hand the Auburn Tigers are equally overwhelmed, as for the first time in several years they made such a remarkable performance in the BCS. Their coach Pat Dye, said that this is what they wanted since 1980s, and now the dreams would come true. The Oregon Ducks finished with almost 500 yards total offense, while the Auburn Tigers, had 589 yards of offense.

Although unofficially the two teams to qualify for the BCS National Championship have been revealed, the official declaration is pending until Sunday night. That is when, the BCS will formally invite the two teams for the match, with the release of the Bowl Championship Series pairings.

"This morning, the Reserve Bank released its Second Quarter Review of Monetary Policy ...

For once, Rams, Chiefs, Mizzou all watchableMAPLEWOOD, Mo. — The Post Bar and Grill has 16 beers o...

Wyoming back in Texas to face another Top 10 teamFORT WORTH, Texas — The Wyoming Cowboys are makin...

Coach at No. 5 TCU insists he only needs to find way to win by 1, not pile on points

No. 5 TCU coach doesn't sweat winning marginsFORT WORTH, Texas — TCU was coming off a one-win seas...

Question of the season: Does Boise State deserve a chance to play for national championship?

Put 'em in or keep 'em out? The Boise State debateUnder-appreciated or overrated. Slighted or skatin...

Newspaper: Musburger says pros could use steroidsBrent Musburger, the play-by-play man for some of c...
Copyright© 2010 The Gaea Times