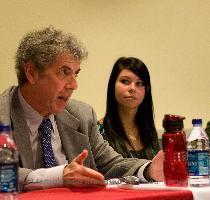 PHILADELPHIA (GaeaTimes.com)- Longtime Sixers beat writer and news writer, Phil Jasner breathed his last on Friday. The well known sports writer died after long battle with cancer at the age of 68. Colleagues and other followers of the prolific writer have taken to the web to express their sorrow at the news of his death. Several fans have also offered condolences to his family at this difficult time.

Rich Hoffman, his colleague and fellow news writer paid an emotional tribute to Phil Jasner after the news of his death. In the tribute, Rich Hoffman spoke about the work ethics of Phil Jasner and also said all his office colleague fondly remember him for his kindness, fairness and generosity. Fans who followed his work called him the fair voice of the Philadelphia basketball community. Though an old-fashioned news writer, Phil Jasner was known for covering everything from college level basketball to the NBA. Rich Hoffman also described Phil Jasner as a man who had an intense love for information. He said that whenever Phil Jasner had some valuable information, it was evident from his face that he was excited to share it.

Ed Stefanski, the 76ers GM spoke about Phil Jasner and said that the man absolutely loved the sport. He explained that he often had long debates with him and felt that he was a very fair and interesting man. For his excellent work spanning over a career of almost 4 decades, Phil Jasner was chosen for induction by 5 Halls of Fame which included the Naismith Basketball Hall of Fame, Theater’s Hall of Fame and the Philadelphia Sports Hall of Fame.

1986 Ashes win was possible because England was a 'damn good team': Gatting

LONDON - Former England cricket captain Mike Gatting has said that he has fond memories of England's...

TATA-owned Jaguar to hire 1500 for production jobs, more in the offing

SYDNEY - Young all-rounder Steve Smith, who was named in the 13 man Ashes squad for the first Test, ...

SYDNEY - Australian skipper Ricky Ponting will be in better condition to decide on spinner Nathan Ha...

Climate scientist involved in emails controversy says he did no wrong

LONDON - A year after he was accused of being at the centre of a political and scientific storm over...

MELBOURNE - Former Australian fast bowler Brendon Julian is of the view that the team's middle ord...

Phil Collins fed up of criticism, wants to quit music

NEW YORK - Phil Collins is so demoralised by constant criticism that he has given a thought to q...