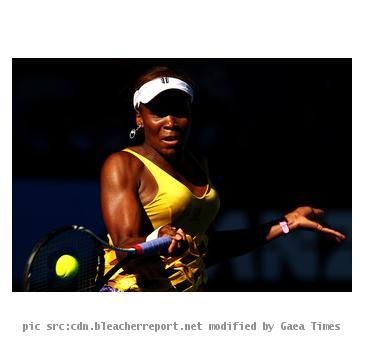 MELBOURNE, AUSTRALIA (GaeaTimes.com)- Venus Williams might have stormed against Sandra Zahlavova at the Melbourne Park, with a straight 6-7, 6-0, 6-4 victory in the Grand Slam Tournament, but it was not her performance, but her dress that called for all the attention. The celebrated tennis player, who is now known as the “Lady GaGa of Tennis”, reportedly wore the “one of the worst dresses ever” according to the sources.

The dress that Venus Williams wore at the Rod Laver Court, during the tournament, was reportedly a replication of the reputed British newspaper, “The Sun”. A source described the dress as a “cheese onion pasty” from the close up, while from the distance, it looked like a “shocking yellow Arsenal away kit of the 90s”. Yet another source said that the dress resembled a “plastic fencing” that is generally seen at building sites these days. Leaving alone the shocking yellow “Onion Cheese Pasty” T-shirt, the other scary part of her outfit, was the gray tie and dye miniskirt, that was a complete mismatch and a total fashion disaster by the self proclaimed fashion diva. One the other hand, the player herself said that the dress that she wore was not so bad. She added that she has often designs her own clothes that have low backs, which are made up of hot fabrics. She has even altered the pieces many times, so that it provides more support. Even this weird dress was reportedly designed by Venus Williams, under her own fashion company EleVen.

Later on, Venus Williams said to a reputed source that it was an “Illusion Dress”, and she picked the gray tie and dye skirt in the last moment, to sport a commando look. However, this is not the first time that she made a fashion disaster. She wore a flesh-colored bottom in the Australian open last year, while in Paris, she wore a tutu skirt, that gave an impression of the “see through” look.

KATHMANDU - Nepal's casino industry, the oldest in South Asia and one of the top revenue-grossers in...

Huge success of GF1 has paved the way for its successor GF2. Panasonic announces a lighter, smal...

NEW DELHI - Films depicting a compulsive liar and a snake woman's vengeance a la "Naagin" and a biop...

LONDON - Renowned Italian artist Boticelli's painting 'Birth of Venus' has been recreated in the for...

WASHINGTON - A new book has challenged the accuracy of the Maya calendar, including the 2012 prophec...
Copyright© 2011 The Gaea Times