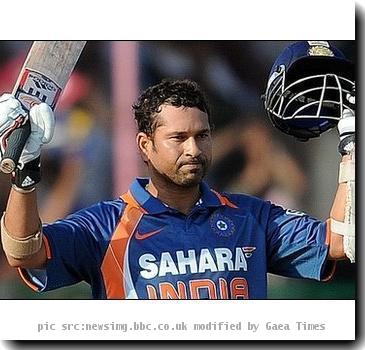 Sachin Tendulkar has became the highest run scorer in international one day cricket. The master blaster scored a double ton to create  history in cricket surpassing Saeed Anwar’s 194 runs against India in Chennai. Sachin played a masterclass innings to complete his double ODI double century in 147 balls. He thrashed the Proteas bowling for 25 boundaries and 3 over-boundaries. He was cramping towards the end of the match, but didn’t give up.

SA was in deep waters from the beginning, after setting out on leather hunt in Gwalior. As the master blaster seemed in tremendous form there was not stopping; overwhelming the Gwalior crowd.  Eventually Sachin dabbed a full and wide ball through the point to score his double century on the third delivery by Langeveldt. This was Sachin’s 46 th ODI century following his century at the test match in Eden Gardens, Kolkata.

There could hardly be an attribute to befitting the legend of Indian cricket who has always spoken with his bat.