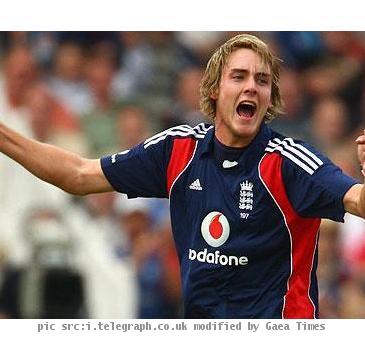 CARDIFF, UNITED KINGDOM (GaeaTimes.com)- England cruised to another easy victory on Thursday as the Australian side showed its lack of experience in the bowling department. England, which have just come out of the T-20 World Cup victory seemed to have all finally found a perfect balance in the side. Stuart Broad stood out in the bowling department for England and skipper Andrew Strauss led from the front to give England a comfortable 4 wicket win over the world’s best limited-over side.

Australia batted first and looked out of sorts from the very beginning. England capitalized on the jittery start and made early inroads with the help of Stuart Broad. He dismissed Ricky Ponting, Timothy Paine and Michael Clark cheaply to break the back of the Australian upper middle order. Though Shane Watson and Cameron White tried to steady the ship, Shane Watson departed in the 21st over to make the Australian scorecard look badly in trouble. With the dismissal of Michael Hussey, it looked like another disaster for the Australians but Cameron White and Steven Smith put up a gritty partnership that helped take the final score to a defend-able 239.

England started off well except the early dismissal of Craig Kieswetter in the third over by Doug Bollinger. First down batsman Kevin Peterson and Andrew Strauss milked the Australian bowling attack with comfort to set the tone for the chase. Their 68 run partnership gave the England middle order enough platform to cruise along without the fear of the run rate or the loss of wickets. Paul Collingwood (48) and emerging star Eoin Morgan (52) made sure that the England team finishes off the match with at least 5 to 6 overs in hand without any further hiccups. England reached the target in 45.2 overs with 4 wickets in hand.

NEW DELHI - India won 100 medals at the Commownealth Games, its higest in the Games' history, and ba...

NEW DELHI - Results of the eight events that were decided on the opening day of the Commonwealth Gam...

MOHALI, INDIA (GaeaTimes.com)- On the fourth day of the first test between India and Austral...
Copyright© 2010 The Gaea Times