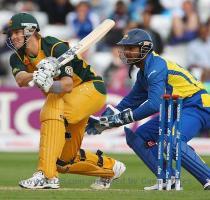 MELBOURNE, AUSTRALIA (GaeaTimes.com)- The Sri Lankan lower middle order pulled off a miraculous win against the Australians in the first ODI at the MCG. The nail biting match swayed in favor of both teams throughout and it was in the end that some of the best ODI cricket in recent years was witnessed by the fans.

Choosing to bat first after winning the toss, the Australians got off to steady start courtesy Shane Watson and Brad Haddin. A sudden collapse in the 16-19 over period saw them staring at a low target but Mr.Cricket Michael Hussey soon came to the rescue and worked the ball around for a well played 71. Some resilient batting from Shaun Marsh ensured that they reach a defendable target of 239/8 at the end of their 50 overs.

The Sri Lankan chase, however, started off badly as both the openers were dismissed before reaching double figures. Skipper Kumar Sangakkara tried to play the role of an anchor but wickets crumbled around him. Reeling at 107/8, most Sri Lankan fans would have turned off their TV sets back home, or just waited for the inevitable defeat. Angelo Mathews, however, seemed to think otherwise. Taking advantage of the inexperienced Australian bowling, he crafted a remarkable partnership with Mumbai Indian Lasith Malinga. The tail wagged well in the form of the curly haired fast bowler and the Sri Lankans looked set to pull off the miracle. However, there was another twist in the tail when Lasith Malinga was run out in the final minute and the match looked set for a tie. Muttiah Muralitharan, who is known for everything but batting skill smashed a boundary off Shane Watson to ensure that Angelo Mathews heroic innings of 77 did not go in vain.