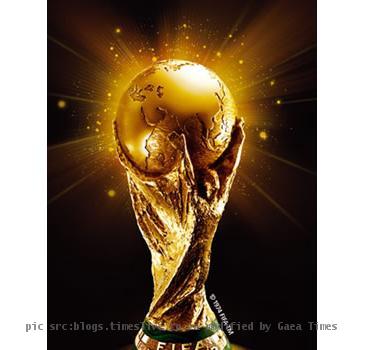 JOHANNESBURG, SOUTH AFRICA (GaeaTimes.com)- The 2010 FIFA World Cup has come to its last stage of games and the teams Spain and Netherlands are all set to play the finals tonight in the Soccer City Stadium. With the game yet to start, predictions are already being made as to who will walk home a happy man, not by people but by animals! After Paul the Octopus foreseeing Germany losing to Spain in the semifinals, it is the turn of Pino the chimpanzee to predict that Netherlands will be the owners of the World Cup this year.

The process was simple and similar to that adopted for Paul. Two bags containing snacks wrapped in the flags of the two finalists of the 2010 FIFA World Cup were placed in front of the chimpanzee who then put his foot on the bag which contained snacks wrapped in the Dutch flag. Moral of the story is that Netherlands will the game tonight. After the pick was made though, onlookers complained about Pino being biased towards the Dutch because he was born in the Netherlands. Though the Netherlands may be far behind if compared to Spain in performance levels, animals sure prefer the Dutch. Pino is not the only animal who says that the Netherlands will win tonight. An African Red River Hog living in a zoo of Estonia has also chosen Netherlands over Spain.

While the world is waiting for the finals of the 2010 FIFA World Cup to begin, animals around the world are predicting the winners of the games even before they can start playing. This year’s World Cup has surely been a game of astrology rather than a game of shots on the field.