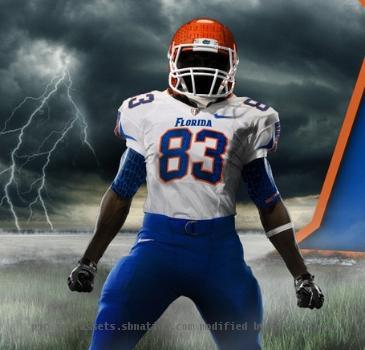 BEAVERTON (GaeaTimes.com) — The recently unveiled extra performance Nike Pro Combat Uniforms for the elite college programs is creating a lot of buzz. The new innovative light-weight and flexible design aims to provide unparalleled protection and movement for the athletes on-field. Each dress has been designed to highlight the core culture and values of the teams involved. The striking feature about the uniforms seems to be its vivid color.

The lead designers of Nike did extensive research regarding the past and the present status of the teams. They also considered the bigger picture each team was striving for. Thus the uniforms would be the flag bearers of the teams identity even before they take the field. Lets have a look at the design feature of each uniform.

The visual aspect is not the only thing striking about the Nike Pro Combat uniforms overhaul. The uniforms were designed quite unconventionally. The design started with the padded base layer and then fabric was worked on it. The fabric used is a four way stretch that will dissipate the slightest instance of water or sweat in the body. The new designs have been made 37 percent lighter than its predecessors. At the same time no compromise has been made on the safety of the athletes involved.