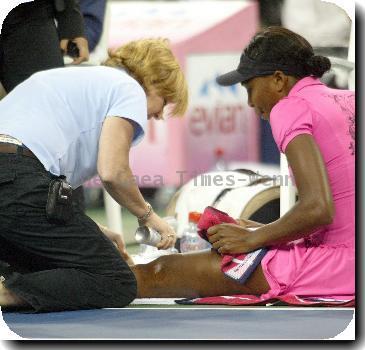 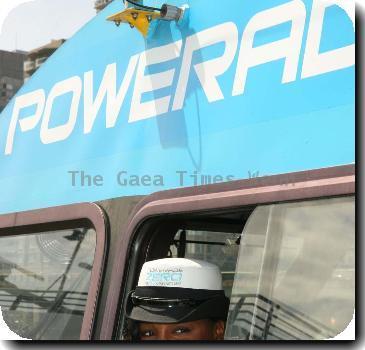 NEW YORK — Venus Williams arrived at this U.S. Open with a bum knee. She hadn’t played a match in more than two months. She hadn’t reached the semifinals at any Grand Slam tournament in more than a year.

And now? Williams is two victories away from her first U.S. Open title since 2001.

The No. 3-seeded Williams overcame nine double-faults and a total of 33 unforced errors to beat reigning French Open champion Francesca Schiavone 7-6 (5), 6-4 in the quarterfinals Tuesday night.

“I want to be in the final, because then obviously it’s just one more step,” the 30-year-old Williams said. “But I’m just focused on the semis, and I don’t get too excited unless the tournament is over.”

Next up for Williams is a semifinal against defending champion Kim Clijsters, who ran her U.S. Open winning streak to 19 matches by eliminating French Open runner-up Sam Stosur 6-4, 5-7, 6-3. Clijsters and Williams have split their 12 previous meetings, but the Belgian won the most recent four, including in the fourth round in New York in 2009.

“Venus is a great competitor. She’s been playing some really great tennis these last few matches,” Clijsters said. “I look forward to it. It’s a challenge.”

“I definitely wanted to … keep the hope going,” said Querrey, who was broken in the match’s last game. “You know, I was close.”

It’s the second consecutive year that zero U.S. men reached the U.S. Open quarterfinals, something that hadn’t ever happened before 2009. And this is the first season that the United States didn’t place a man in at least two Grand Slam quarterfinals since the French Open first admitted foreigners in 1925.

Wawrinka, who joins Roger Federer to give Switzerland two quarterfinalists at a major for the first time, takes on No. 12 Mikhail Youzhny of Russia for a semifinal berth. Youzhny eliminated unseeded Tommy Robredo of Spain 7-5, 6-2, 4-6, 6-4.

Robredo was one of five Spanish men in fourth-round action Tuesday — and the others all played countrymen. No. 8 Fernando Verdasco closed out his thrilling 5-7, 6-7 (8), 6-3, 6-3, 7-6 (4) comeback victory over No. 10 David Ferrer — only the second match Verdasco’s ever won after dropping the opening two sets — with as spectacular a match-ending shot as any.

Nearly 4½ hours in, Verdasco found the energy to sprint from the baseline up to get to a drop shot and whip a forehand around the post for a winner. Verdasco dropped to his back, let go of his racket and put his hands on his head. Then he rose for a hug with Ferrer.

Watching on TV in the locker room were No. 1 Rafael Nadal and No. 23 Feliciano Lopez, who were waiting to follow Clijsters and Stosur into Arthur Ashe Stadium.

“I’m happy for Fernando,” Nadal said, “but at the same time, sorry for David, because he deserved to win, too, no?”

Nadal then went out and showed no mercy for Davis Cup teammate and pal Lopez, beating him 6-3, 6-4, 6-4 in a match that ended at 1:16 a.m. Wednesday. Nadal saved all four break points he faced and hasn’t been broken a single time through four matches.

Nadal’s match against Verdasco will be the first all-Spanish quarterfinal in U.S. Open history. It’s also a rematch of their classic 2009 Australian Open semifinal, a five-setter that lasted 5 hours, 14 minutes.

When Williams was asked whether she sensed any responsibility to carry American hopes, she smiled and replied: “If I felt like that, I don’t think I’d be able to even raise my arms. Thankfully, I don’t feel that way. I think my expectations are enough to deal with, so I’m just going to hopefully temper that.”

Her own expectations are based, of course, on a lengthy list of successes, including seven Grand Slam singles titles. Two came at the U.S. Open, in 2000 and 2001. But she last made the semifinals at Flushing Meadows in 2007, and she hasn’t played in the title match since losing to her sister Serena in 2002.

But Williams didn’t mind the delay one bit.

“I’m a pro at waiting for my match: Singles, doubles, you name it, I’ve waited. I’ve waited for rain delays. That’s a part of tennis,” said Williams, whose other five major singles championships came at Wimbledon. “I’m a pretty laid-back person, so I don’t get too tight waiting.”

She and the sixth-seeded Schiavone both found it tough to play the way they wanted, thanks to swirling wind that Williams said made it impossible to practice serves during the warmup time, because her ball tosses kept going astray.

Still, she handled the conditions better in the end, improving to 8-0 against Schiavone.

The key was the tiebreaker, when Williams went ahead 4-0 with a backhand passing winner on the run. She moved well all evening, showing not a shred of a sign that there is anything wrong with her left knee. Williams sprained that kneecap in early August, which kept her from playing any hard-court tuneup events before heading to New York.

Schiavone, though, took the next four points to even things. Then she made it 5-all by winning a 12-stroke exchange with a volley, celebrating by skipping and pumping her fist — the sort of excellence at the net and general exuberance she showed en route to the title in Paris, where she became Italy’s first female Grand Slam champion.

But then came two shots Schiavone would come to regret. First she pushed a backhand long to give Williams a set point at 6-5. Then she sailed a forehand long to end the set.

“I’m so angry,” Schiavone would say afterward. “Instead of attacking and going for the lines, I should have played a little safer and put the ball in.”

Here is why that set was so crucial: Williams entered Tuesday with a 51-1 record at the U.S. Open when winning the first set — the only loss was 4-6, 7-5, 6-1 to eventual champion Clijsters in the 2005 quarterfinals.

So while Schiavone could insist, as she did, that, “When you lose the first set, you still have every chance to win the match,” Williams is now 52-1 in New York when the opening set is hers.

“I feel like when the stakes were higher,” Williams said, “I was able to raise my game.”

Now comes the time to do that in the U.S. Open semifinals against Clijsters — and, if Williams wins that, in the final, too.