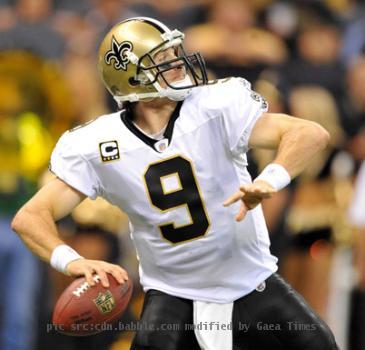 NEW ORLEANS (GaeaTimes.com) — The afterglow of victory lingers long as The Saints outraged their fury upon The Vikings.

Supposedly, The Vikings’ lack of healthy cornerbacks led to their defeat. Quarterback Drew Brees lead the battle for The Saints. It was Drew’s awesome performance that brought home victory for The Saints. This was the opening match of the season and it ended up in a 14-9 win for The Saints. Lack of proper strategy led to The Viking’s doom.

Husain Abdullah started off with strong safety in place of Tyrell Johnson and Asher Allen got the nod ahead of veteran Lito Sheppard at right corner. Abdullah’s ascension was much of an interest given that Johnson and Jamarca Sanford spent their training camp battling for the starting job.

I think that with Husain Abdullah being able to sub in there at nickel if he needed to… They played a bunch of two-tight-ends so they could find out if you’re playing man-to-man or not. … We felt like Asher could handle it at left and right [corner] and then Lito coming in to play right and Antoine jumping in in the nickel, … For a while it’s a little bit of a ‘Where’s Waldo?

It was a moment of sheer pleasure for Drew Brees and tears poured out of his eyes as he held up his one-year-old son Baylon. Let us hope Drew delivers us with more of some exciting performances in the days to come.