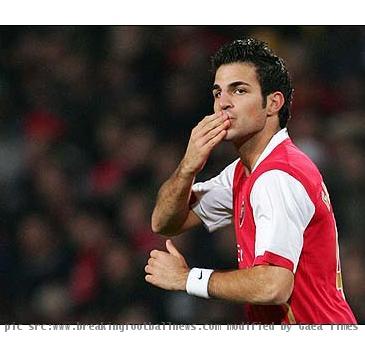 LONDON (GaeaTimes.com) — Superstar Mid-Fielder Cesc Fabregas confirmed his loyalty to Arsenal by re affirming his position in the club. He says that he is enjoying his job very much and his mind is focused. The Catalan was being pursued by Barcelona all summer.

In an interview he said

I am completely focused, I know what I want to do and what I have to do. My mind is centered on what happens on the pitch which I enjoy

He also stated that the only circumstance where he should worry would be when he will not be able to play Soccer. He refers to his club Arsenal as a “Great Club”, he also mentioned that he was looking forward to a great year with the club. He also refuted speculations regarding his possible move to the other Spanish Giant Real Madrid next Summers. He said

I have set myself other objectives, I know what I want, I know where I want to play and that’s it.

He went on to say

It is not that I am against Madrid or any clubs in the world but I have my desires and my objectives as a player, although I am also owned by somebody

Seems like Arsenal has got a keeper in Cesc Fabregas. Well if he moves out Arsenal is going to be painfully short of an icon.