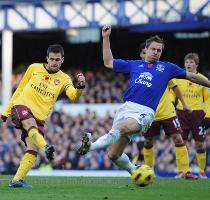 WALTON, UNITED KINGDOM (GaeaTimes.com)- Arsenal proved yet again that they are one of the best teams in league with a 2-1 win over Everton this Sunday. Arsene Wenger’s men survived a late rally from Everton to assert themselves in the second position behind Chelsea in the league tables. The win also gives them the much needed momentum to that could finally put them at the top.

The first half started rather tamely for both the sides and it was not till the 36th minute that much action was seen. There was, however, great chance for Everton when Seamus Coleman led the charge deep into the Arsenal defense and then looped the ball for Tim Cahill to head. Tim Cahill, however failed to get over the ball for control and it looped over the net. The goalkeepers had little action in the rest of the half except in the 36th minute when Bacary Sagna scored a goal from a rebound of the goalkeeper. The rest of the half, Arsenal remained content with playing the ball around but still managed to have more possession of the ball in the opponent’s half.

The second half started like a dream for Arsenal as Cesc Fabregas drove in a ball rather casually from the penalty spot after a fantastic pass by Marouane Chamakh. With 2-0 lead, Arsenal looked to knock around the ball till the end of the 90 minutes. Everton, however, continued to attack and some of their attempts also showed great promise. In the end, Tim Cahill finally made use of a pass by Saha and the lead was reduced to 2-1. The next few minutes made for some extra-ordinary football but Arsenal sailed home comfortably.

LONDON - Coach Arsene Wenger believes Arsenal displayed all qualities needed to be champions as the ...

Gazza may be jailed for drunk driving

LONDON - Former England football star Paul Gascoigne is likely to be jailed after he admitted ...

LONDON - One fixture that stands out above all others in this week's midweek Premier League programm...

Why Rooney wanted to leave Man U, and why he finally stayed

LONDON - Manchester United striker Wayne Rooney has said that he is delighted about the new five-ye...

'When Gavaskar went down on his knees, you knew you were in trouble,' says Roberts

ANTIGUA - Anderson Montgomery Everton Roberts was not a name to be trifled with in his playing heyda...

LONDON - A group of 40 Manchester United supporters, many wearing balaclavas and hooded tops, have w...
Copyright© 2010 The Gaea Times