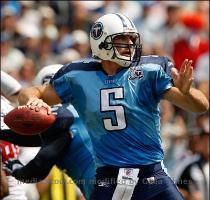 JACKSONVILLE, (GaeaTimes.com)- Yesterday’s NLF match between the Tennessee Titans and the Jaguars was a treat for all Titan fans. The team literally made no effort to bring the game on its side right from its beginning, ending with a final score of 30-3 against the Jaguars. All through out the match, the Jaguars could not do much about its submission against the fierce offense of its opponent, the Titans. The injury of Vince Young did not make any difference to the match, as he was replaced by another competent quarterback, Kerry Collins.

The match started with the performance of the strong quarter back Vince Young, who has an impressive quarterback rating of 95.1. He took the control of the game from its first quarter which helped in pinning down the opponents. However, he sprained his knees before the second quarter of the game, after throwing a 23 yards touch down pass to Kenny Britt on the opening drive. Young Vince was immediately replaced by another senior and strong quarter back, Kerry Collins, 37, who has a quarterback rating of 80.2 and a total of 149 pass yards. Soon after the replacement, he threw a short touch down of 2 yards to Bo Scaife. This created a smooth scoring drive that resulted to a goal in the second quarter of the game.

Kerry Collins completed 11 out of 16 passes in 110 yards, with one touchdown. He completed 111 yards rushing. This resulted in five consecutive scoring drive for the Titans, and settled them with a score 4-2, over the AFC South. The Titans got a lead of 17-0 by the half time of the match, under the performance of Kerry Collins. The quarter not only gave the Titans a lead of two touch downs but also cornered the Jaguars in their own 6-yard line.