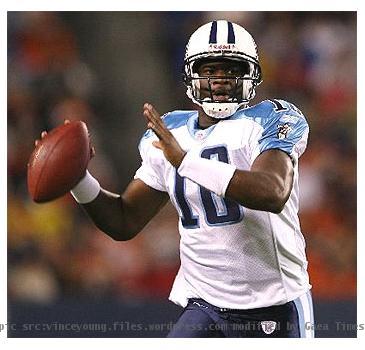 NEW YORK (GaeaTimes.com) — The Tennessee Titans quarterback Vince Young had to leave the game midway on Monday night due a sudden knee injury. He left the game in the first quarter but still Titans managed to have a glorious victory over Jacksonville 30-3.

Young sprained his left knee during an attempt to pick up the ball at his 20-yard line. Then Young left the game and Kerry Collins took over at quarterback for his team.

Vince Young was 3-of-5 passing for 61 yards at the time he was injured. His 23-yard touchdown pass to Kenny Britt on the game’s opening drive game the Titans a 7-0 lead. Titans coach Jeff Fisher told that Young’s injuries is not so serious.