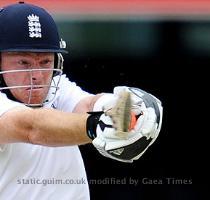 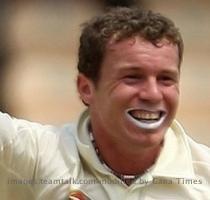 BRISBANE, AUSTRALIA (GaeaTimes.com)- The first day of the Ashes 2010 had all the drama that one can expect in a Eng vs Aus test. Choosing to bat first after winning the toss, England got off to a rather shaky start after Andrew Strauss was dismissed in the very first over. Alistair Cook and Kevin Pietersen made a brave comeback and then Ian Bell took the latter’s place. While Alistair Cook hung on to his dear wicket and Ian Bell played some well timed shots, England looked relatively comfortable at 197/4.

Batting at 67 with a strike rate of less than 40, Alistair Cook may not have been a treat to watch for the Australian audience but he made sure that England reach a competitive target in the first inning. No one could have prepared England for what was to come. Peter Siddle bowled the 66th over and removed Alistair Cook in the third ball. He followed it up with a dead straight delivery that knocked off the off stump of Matt Prior and then went on to complete his hat-trick with an LBW of Stuart Broad. What remained of the English batting in the first Eng vs Aus test, tried to salvage some of the runs and though Ian Bell led the resistance for a while, the rest of the tail-enders failed to provide support. England were wrapped for 260 in the first innings.

Australian openers Shane Watson and Simon Katich only had one intention when they came down to bat towards the end of the day, and it was to survive the day. Though James Anderson tried to tempt Shane Watson with deliveries outside the off-stump, the batsmen resisted the offers with style and looked completely control till the end of day 1 of the first Eng Vs Aus test.

NEW DELHI - To further boost India's economic ties with the Gulf region and to promote trad...

If you are in IT industry for a decade now and have been dreaming of a job in banking sector, th...

NEW DELHI - Results of the medal events that were decided on the second day of the Commonwealth Game...
Copyright© 2010 The Gaea Times