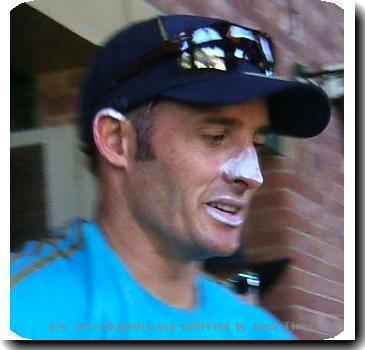 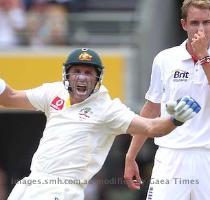 BRISBANE, AUSTRALIA (GaeaTimes.com)- Mr.Cricket Michael Hussey came to the rescue of his side once again as Australia asserted itself in the first test on day 3. With day 2 ending on a rather high note for the English, it looked like the day 3 morning could go in any direction. Michael Hussey and Brad Haddin, however, ensured that chances of an Australian defeat are ruled out by smashing centuries and keeping the scoring rate high as well.

Batting on 81* at the end of day 2, Michael Hussey continued to look well settled on the following day. His well crafted knock was a combination of quick 1s and 2s and also regular boundaries. Both Brad Haddin and Michael Hussey ensured that the bad balls are punished and their solid defense was too good for the good balls. Brad Haddin played the perfect foil to his batting partner in the initial part of the inning and then went on to notch up his test ton as well. With a lead more than 200 at this point, it looks like the English cricket fans will be praying for rain if they come out to bat today.

Michael Hussey missed out on a double ton by a small margin as he was dismissed on 195 by Steven Finn. Attempting a pull shot of the fast medium bowler, Michael Hussey got the ball higher on the bat than he would have liked. The ball scooped to Alistair Cook standing at mid-wicket. Though Michael Hussey and Brad Haddin are both back to the pavilion, Australia are in complete control of the game on day 3. It will be interesting to see the tactic used by the Australian captain if England come down to bat today.

Teachers in UK to bring back traditional reading tests

LONDON - Teachers in Britain are to bring back traditional forms of reading tests after one year of ...

Ancelotti denies he is quitting Chelsea

LONDON - Carlo Ancelotti has refuted suggestions that he is thinking of quitting as manager of Chels...

NEW YORK - A new study has revealed that Indians and Chinese managers are rated the best amongst the...
Copyright© 2010 The Gaea Times