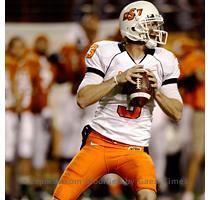 STILLWATER (GaeaTimes.com)- The No. 14 Oklahoma Sooners have finally done it. On Saturday they outlasted the No. 10 Oklahoma State Cowboys at the Boone Pickens Stadium, in Stillwater. The Oklahoma Sooners were badly in need of a victory as they had been facing crisis for quite some time. Those present at the Boone Pickens Stadium had a wonderful time, enjoying the thrilling football match between the two rival university teams.

According to a source, present at the venue to witness the football game, the game certainly seemed like a one where Landry Jones, the Oklahoma Sooners quarterback was desperate to break away from the nightmare which his team has been facing for some time back making the season absolutely wretched for them. Their last few performances had been subjected to severe criticisms. Landry Jones gave a superb performance as he threw 468 yards and four touchdowns. Two of the touchdowns had come up at the later point of the game and ultimately shot up victory against the Oklahoma State Cowboys, in the Bedlam Battle classic.

Landry Jones paired up with fellow Cameron Kenney on an 86-yard touchdown and later on moved to James Hanna giving a 76-yard strike. On Saturday night Landry Jones was the man to watch out for. His performance gave the team a stupendous victory over the Oklahoma State Cowboys, adding a thrilling end to the game. His superb conduct has helped the Oklahoma Sooners to be back once again in the place to play for the Big 12 title which they had been missing out since 2000. Landry Jones and his team Oklahoma Sooners have undoubtedly come up as the underdog in the football series.

Cement-like substance could help the environment

WASHINGTON - A scientist has developed a cement-like substance that could help with stormwater manag...

COLUMBUS (GaeaTimes.com)- Just a day back the FDA came down heavily on the drinks manufacturers ...

Bonding over problems can be stressful for women

WASHINGTON - A study has found that female friends who dwell on each other's problems show an incre...

NEW YORK - Heart Attack Grill Restaurant in Arizona is like heaven to those who are obese but still ...

Eggs recalled in US over salmonella scare

LOS ANGELES - Hundreds of thousands of eggs have been recalled in eight US states for fear of salmon...

LONDON - A 10-day-old girl died in Britain when her mother put her in a washing machine with a pile ...

LONDON - A ten-day-old baby girl in the US died after her mother placed the newborn into a washing m...
Copyright© 2010 The Gaea Times