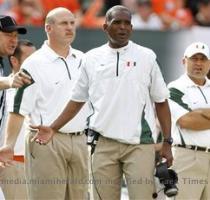 MIAMI (GaeaTimes.com) University of Miami has fired its coach of four years Randy Shannon, after the team finished a 7-5 regular season. Although the coach is known to have been associated with many ups and downs of the team, his failure to yield a better performance from the player and not living up to the team’s expectation in the recent past, prompted the authorities to take this adverse decision.

The decision to fire Randy Shannon was taken by Miami athletic director Kirby Hocutt. The defeat of Miami Hurricanes to South Florida on Sunday afternoon, with a score of 23-20 in overtime, made the team decide his fate, according to a source. After the match, Kirby Hocutt was not available for any comment, as he supposedly switched of his mobile in order to avoid any media nuisance regarding this issue. Reports say that Randy Shannon drove away from the stadium immediately after his team lost to South Florida. He was quite unsure about his destiny, considering his team’s consistent poor performance, in the last few matches. Miami’s home defeat to Florida State on Oct. 9, followed by its loss to Virginia just three weeks later were rather humiliating for the team. Since then, Kirby Hocutt is said to have been wondering whether he should make some alteration in the team, by dismissing some stuffs and coaches.

Since he was inducted in the team in 2006, as a replacement for Larry Coker, Randy Shannon got 5-7 in the first season, 7-6 in the second and then 9-4 last year. However, he never got the Miami Hurricanes past second place in the Atlantic Coast Conference’s Coastal Division, or won a bowl game. Miami could not be a part of the Bowl Championship Series since 2003, or win ACC championship ever since it left Big East. Randy Shannon was proudly inducted as the coach of Miami Hurricanes in 2006 by Miami University president Donna Shalala.

Some songs on MJ's new album are bogus, says Randy

LONDON - Michael Jackson's brother Randy has said that some of the songs on the tragic icon's new al...

NEW YORK - You'd think that food, water and shelter were some of the important requests of evacuees ...

LONDON - The Jackson brothers are set to launch their own clothing line, which will pay homage to th...

WASHINGTON - A new study has revealed that male spiders that get to have sex only once or twice in t...

LONDON - Singer Rod Stewart has blasted Russell Brand over the latter's claim that he slept wit...

Quaids released from detention in Vancouver

TORONTO - Oscar-nominated actor Randy Quaid along with his wife has been released from detention in...
Copyright© 2010 The Gaea Times