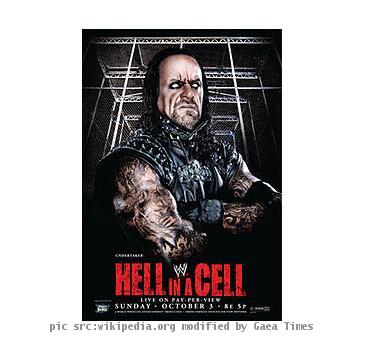 DALLAS (GaeaTimes.com)- The annual WWE event “Hell In A Cell 2010″ took place yesterday in Dallas, Texas, yesterday evening. The pay-per view event was organized by WWE, in front of American Airlines Center. A huge number of audience gathered at the venue to enjoy the six power packed matches and witness the results.

The match in between Wade Barrett and John Cena, was that of a real excitement, as the two wrestlers had made a bond that said, if John Cena loses to Wade Barrett in “Hell In A Cell 2010″, then he has to join the Nexus. But if he wins, then Nexus would be disbanded, and never interfere in John Cena’s wrestling career. John Cena has been troubled by Nexus since an year, and he lost his last chance to bring the matter to an end. It was a bad day for the John Cena fans, while the results yielded a relief for those who supported Wade Barrett, the leader of Nexus. Yet another dramatic match was that for the WWE Unified Divas Championship, between Michelle McCool and Natalya.