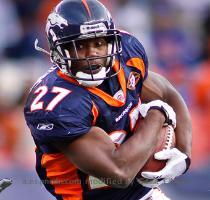 OAKLAND (GaeaTimes.com)- Right now the Denver Broncos are going through a bad phase after last night the team lost out to the Oakland Raider. Adding salt to the injury, running back Knowshon Moreno suffered a nasty injury during the initial stage of the match. Knowshon Moreno received an injury during the first quarter of the match after he was badly hit at his side/ribs as a result of which he had to leave the game. His team hoped that their running back might be able to join them but to their dismay it did not happen.

The Denver Broncos lost the game out to their opponents after they were beaten by a 39-23. Oakland fans had a great time seeing their team win the match on their home ground at the Oakland Coliseum, California. Denver Broncos fans received the first sign of threat as Knowshon Moreno got hit during the first quarter. Their threat culminated into reality after the team failed to succumb the injury that the Raiders made them suffer. Knowshon Moreno was hit at his side and left the field. Although after some time he was seen coming back to the sidelines but was not wearing his pads clearly indicating that he would not be returning back.

Until now there has been no official statement released on Knowshon Moreno’s injury. However, a source claimed that diagnostic details of the medical reports will be announced shortly. There are high chances that the running back has injured himself crucially at the abdominal area. A source close to the footballer said that Knowshon Moreno was extremely disappointed with his injury. His disappointment strengthened after his team lost the game.

Once-marquee SEC matchup now just an afterthoughtATHENS, Ga. — This used to be one of those signat...

Laurence Maroney passes his physical with the Denver Broncos, completing trade from Pats

Maroney latest nicked-up back in DenverENGLEWOOD, Colo. — Moreno & Maroney might have to wait a wh...

Big Ben's day short in Steelers' 34-17 loss to Denver; Will his suspension be abridged, too?

Big Ben's day a quick one, what about suspension?DENVER — A quick hook didn't sit well with Ben Ro...

Broncos limp through first week of campENGLEWOOD, Colo. — The busiest man at the Denver Broncos' t...

Broncos say Dumervil injures pectoral area of chest, timetable for return up in the air