Ralph Friedgen Out Of Maryland Terrapins? 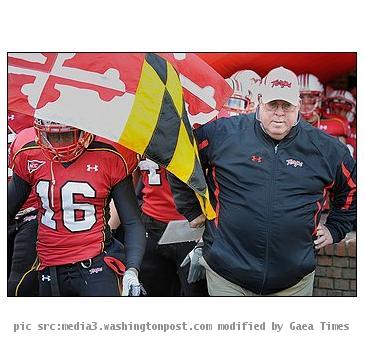 COLLEGE PARK (GaeaTimes.com)- The head coach of University of Maryland’s football team, Ralph Friedgen has been, reportedly, asked by the university officials to step down from his post for the next season. Sources close to the team said that if Ralph Friedgen refuses to retire from his post then the university board will have to pay him $2 million to buy out his contract for the remaining year. However, sources claim that the university has not given any deadline to the head coach to make the decision. Athletic Director of the team, Kevin Anderson said that he expects that the team will make an announcement next week.

However, Kevin Anderson declined to comment anything about Ralph Friedgen’s fate in the team. The Athletic Director said that he would not answer the question right at this point of time. A reputed media source reported that Kevin Anderson had a meeting with the other team officials on Saturday evening and said that the team would honor the $2 million contract if needed. However, the team officials said that nothing is decided yet and they are still discussing about the matter. Matt Furstenberg, the tight end of the team said that the whole news is shocking as 24 hours ago also nobody could have believed that the head coach of the team is stepping down from his post.

The offensive lineman of Maryland Terrapins, R.J. Dill said that their Athletic Director Kevin Anderson has informed them about the decision of the University. On the other hand, Ralph Friedgen was unavailable for any comments. The head coach has a record of 74-50 in 10 seasons. The team officials declined to say if Ralph Friedgen would be the coach of Maryland Terrapins in its game against East Carolina.

LONDON - Mark Twain's autobiography, released a century after his death, has reopened old wounds. As...

He took Obamas down the passages of history

NEW DELHI - As US President Barack Obama and his wife Michelle Obama strolled around the sprawling H...

MELBOURNE - Mexican chefs made a scrumptious entry into the record books when they prepared ...